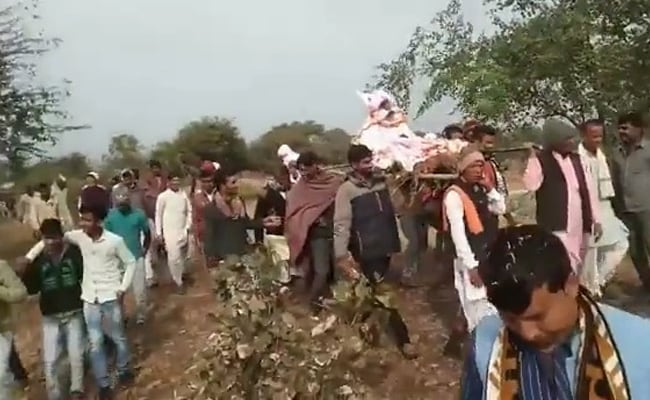 Two people have been arrested for allegedly flouting Covid protocols after a crowd of about 1,500 gathered for the funeral of a monkey at a village in Madhya Pradesh.

Pained by the monkey’s death on December 29, residents of Dalupura village in Rajgarh district organised last rites. Visuals show a funeral procession with hymns being chanted as people carry the bier to the cremation site. A youth named Hari Singh also shaved his head in keeping with Hindu rituals. The monkey was not a pet, but frequented the village. In several parts of the country, monkeys are considered sacred for their association with Lord Hanuman.

The residents of Dalupura village in Rajgarh district first held the funeral rites of a langur that died of the cold on 29th December with the chanting of hymns, now hosted a mass feast for more then 1,500 people as part of funerary rituals. pic.twitter.com/aLSOPMqOG6

Following the last rites, villagers collected money and organised a feast for more than 1,500 people. Cards were printed and distributed, inviting villagers to the feast.

A video of the feast showed hundreds of people seated in rows under a massive pandal. Women and children are seen eating as a group of men go around serving food.

The gatherings took place at a time when the state is in the throes of Covid surge powered by the new fast-spreading Omicron strain and large public gatherings are banned under Section 144 of the CrPC.

Police have registered a case for violation of Covid protocols and arrested two people as many other villagers are hiding away fearing action.

Madhya Pradesh yesterday reported 2,317 fresh Covid cases and one death due to the infection over the past 24 hours. The case count was nearly 300 more than the tally of 2,039 the previous day.

The number of active cases in the state stands at 8,599.