A Field In Scotland Is Burning Under The Ground. Video Clip And Photos Inside 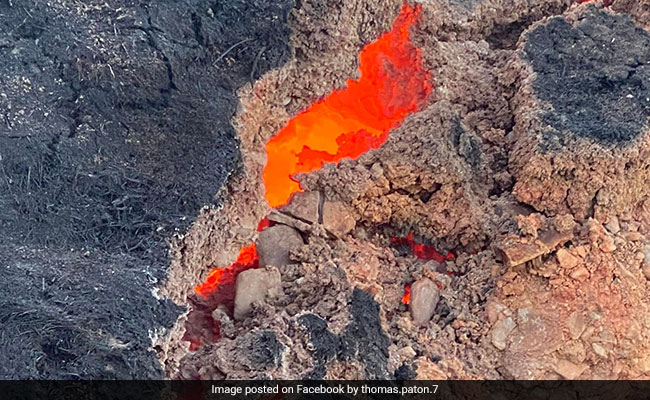 Lava-like substance was spotted in a field in Scotland.

A field in Scotland is on fire, with a lava-like substance flowing underneath it, and residents have been urged to stay away and not venture anywhere close to it. A worried local resident, Tom Paton, shared details of the blazing earth in Patna, East Ayrshire, on Facebook and also uploaded a video and a few photographs where the molten rock is visible. Calling it the “burning field”, Mr Paton said that the authorities needed to do something soon before there’s a fatality.

We can see glimpses of red-hot cavities in the ground. The site is located in a former caravan park in Ayrshire, Scotland. The fumes and the red blaze suggest the presence of burning, molten rock under the ground. Charred black rocks and sparse grass vegetation surround the area. The ground is fuming even as temperatures in the region have dropped to sub-zero levels.

report in The Sun states that “the site hasn’t been cordoned off”. The report went on to add that the “occurrence is reportedly caused by a fire in a disused coal mine which has been burning for years”.

In his post, Mr Paton further stated that it was “hard to believe” that the Scottish Coal Board had just fenced the “dangerous area” with just “two pieces of wire”. He goes on to add, “The user added, “I don’t understand how it’s been like this for at least three years and not much attempt to extinguish it has happened as of yet. Maybe a bit of media attention is needed before there’s a fatality.”

Other locals, too, have begun to show their concern about the situation.

Commenting on Mr Paton’s post, one user wrote, “Surely the ground will eventually collapse into a pile of ash. If it hasn’t burned out by now it never will. That’s bad!! Didn’t realise it was still going.”

Another user questioned the authorities and demanded an immediate response to the problem. “Only a matter of time before a wean is hurt, or worse. I’ve brought it to the attention of our Councillor on more than one occasion but nothing was done,” wrote the user.

Mr Paton also told Ayrshire Live that no matter how cold it gets, thanks to the fire, the snow “just melts away instantly”. He added that the smell was “potent”, and the situation “becomes worse in the summer months”.

The Sun report stated that the council chief was aware of the problem. The report also quoted a spokesperson for the local authority as saying that the East Ayrshire Council “is aware that appropriate safety measures were put in place, including fencing around the affected area, but unfortunately that has since been removed by unknown parties, which clearly isn’t helpful.”