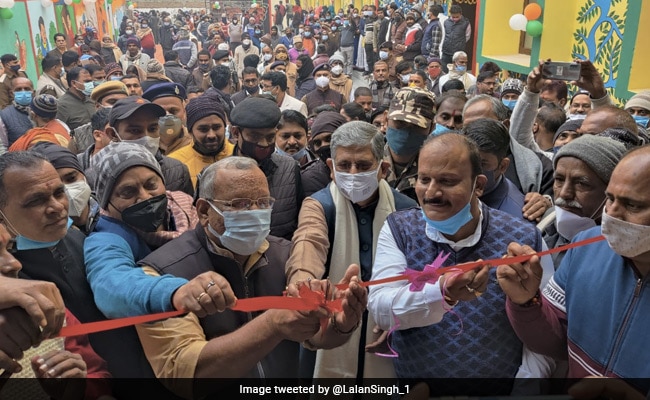 Bihar Deputy Chief Ministers Tarkishore Prasad and Renu Devi, and two of their cabinet colleagues – Ashok Choudhary and Sunil Kumar – have all tested positive for COVID-19.

This comes two days after as many as 11 people present at Chief Minister Nitish Kumar’s residence tested positive for the virus. Of these, six were supposed to attend the Chief Minister’s ‘Janata Durbar’ – an interaction with the public – while the rest were members of a catering team.

In July last year Nitish Kumar tested negative after coming in close contact with a BJP leader who had tested positive. A few days before a close relative of the Chief Minister had also tested positive.

Meanwhile, Tarkishore Prasad was at another function with Rajiv Ranjan, or Lalan Singh, the National President of the ruling Janata Dal (United), and Mr Singh too has tested positive.

Photos of that event were shared by Mr Singh on Twitter and showed hundreds of people crammed into what appeared to be a small hall. Very few people were wearing face masks.

“I have tested positive for Covid. Have isolated myself at home now. Those who came in touch with me in last few days, please isolate yourself and get RT-PCR tests at (the) earliest,” Mr Singh tweeted.

I have been tested positive for Covid. Have isolated myself at home now. Those who came in touch with me in last few days, please isolate yourself and get RTPCR tested at earliest.

On Monday Nitish Kumar said reports of his colleagues testing positive was “very sad”. He underlined the danger posed by the virus, pointing out that cases were now spreading very quickly.

Last week, after Bihar reported its first case of the more infectious Omicron variant, Mr Kumar said the third wave of the pandemic had begun in the state. “Bihar has recorded its first Omicron case. Everyone has to be alert… The third Covid wave has begun (but) we are fully prepared,” he had said.

Bihar’s first Omicron case is a 26-year-old resident of Patna’s Kidwaipuri neighbourhood who had recently travelled to Delhi; the national capital is witnessing an alarming spike in Covid cases and has the second-highest number of Omicron cases in India, after Maharashtra.

Yesterday evening Bihar reported 893 new COVID-19 cases (of all known strains) to take the state’s active caseload to 2,222. Over 500 cases were reported from capital Patna.

This morning India reported a massive 58,097 new COVID-19 cases overall – the sixth daily increase over the past nine days – amid widespread concern over the Omicron variant.