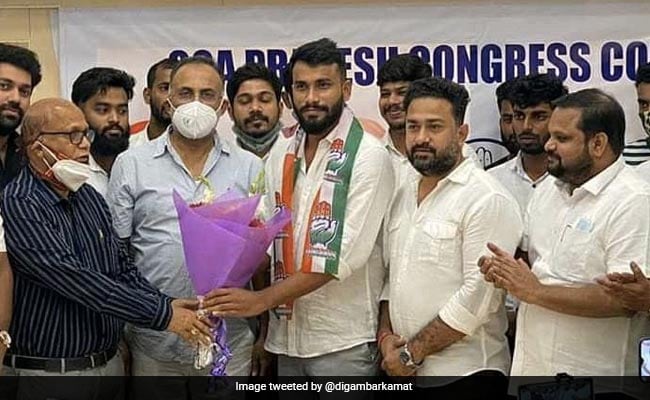 BJP’s national executive member of Yuva Morcha, Gajanan Tilve, from Shivoli in Panaji on Sunday joined Congress and alleged that the saffron party has no principles and its motive is to wrest power by going to any extend.

“BJP’s motive is to do anything for power. No principle exists in BJP. This party has now changed. This forced me to leave the party and join the Congress. I am hopeful that Congress will win with a majority to form Government,” he said.

He said that  Mr Shivoli is lagging behind in development. “I am hopeful that Congress will help us in developing our constituency,” he added.

Dinesh Gundu Rao said that the joining of Gajanan Tilve will strengthen the Congress party. “All over Indian and in Goa, BJP has failed. It has no principles, no ethics, no morality and it is a most corrupt Government,” Mr Rao said.

He said that youths are frustrated as there are no jobs, and even they have to pay for jobs. “It is surprising that BJP’s Ministers and MLAs are levelling charges against the Government. But BJP is in no mood to make enquiry,” Mr Rao added.

Mr Rao said that people will reject BJP in the Assembly election. “Only Congress can give a stable Government. I feel happy that young leaders with commitment and knowledge of politics are joining Congress,” he further said.

Mr Kamat said that youths have come to know that BJP has killed the democracy and hence, they are getting attracted towards Congress. “We welcome Gajanan Tilve and all his supporters in Congress party,” he said.

Varad Mardolkar said that family raj is taking place in BJP’s youth Morcha, which forced Tilve to leave BJP. “I congratulate him that despite having BJP’s Government at the Centre and State, he has joined Congress,” Mr Mardolkar said.

Akhilesh Yadav also hit out at the BJP Government, saying BJP has played with the future of youths by selling jobs.

The counting of votes in all states will take place on March 10.