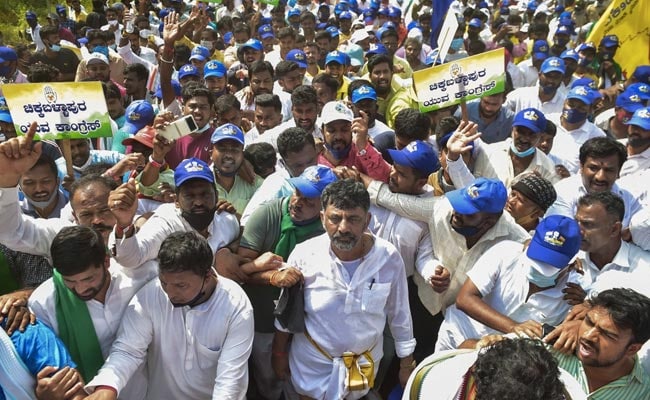 The Congress today called off its widely-criticised padyatra or 10-day march in Karnataka midway after five leaders tested positive. The party’s Karnataka leaders announced the decision after a call from Rahul Gandhi, according to sources.

FIRs were filed against more than 60 Congress leaders on Day Five of the controversial padayatra that defied Covid rules amid rising cases in the state.

“We have been successful in the last five days. We were supposed to end the padayatra in Bengaluru. Because of the third wave we have to postpone it for now,” former Chief Minister Siddaramaiah told reporters.

He justified continuing the campaign despite the Omicron-driven Covid surge, saying it had been planned nearly two months ago.

Earlier today, Chief Minister Basavaraj Bommai had written to Siddaramaiah and state Congress chief DK Shivakumar urging them to call off the march that was organised to push for the Mekedatu dam project on the river Cauvery.

Mr Bommai, in his letter, assured that the project is on track.

Frightening visuals of Congress workers marching in a huge crowd have been emerging from Karnataka, which reported a 44 per cent jump in Covid cases last evening with over 21,000 cases.

Two senior leaders leading the march, Veerappa Moily and Mallikarjun Kharge, tested positive. They had shared a stage with Mr Shivakumar and Mr Siddaramaiah during the padayatra.

Amid sharp condemnation of the “super-spreader” march, Mr Shivakumar held a meeting with local Congress leaders this morning.

The Congress launched the march to push the state’s BJP government on the Mekedatu project close to the Tamil Nadu border. Tamil Nadu has challenged in court Karnataka’s plans to build a dam to conserve water during floods and bring the water to Bengaluru, about 200 km away.

The Congress had planned to end the 139 km-march in Bengaluru, but had been barred by the civic authorities from entering the city.

Yesterday, a third FIR was filed against 64 party leaders, including Mr Shivakumar and Siddaramaiah, for defying Covid restrictions by marching in a crowd for about 14 km, mostly without masks or distancing.

On Wednesday, the Karnataka High Court questioned the state’s BJP government why it allowed the Congress padayatra and took no action to stop it.

The court also asked the Karnataka Congress unit whether it had taken permission for the march and whether the party had complied with Covid rules.

Both the state government and the Congress have to respond by Friday.