Covid Cases Down But Hospitalisations Up In Mumbai, Delhi, Other Cities

The alarming spike is largely driven by Omicron – the latest variant that has caught global attention.

India has seen over 17 lakh fresh cases since last week – the hospitalization rate and the rush in the third wave so far, however, have been nothing in comparison to the second wave that had pushed the healthcare system to a brink.  The alarming spike is largely driven by Omicron – the latest variant that has caught global attention.

As NDTV analyzed the hospitalisation data in the last seven days, it was seen that Mumbai and Delhi saw an uptick in the number of people needing hospital care even as cases kept falling for seven days consecutively. 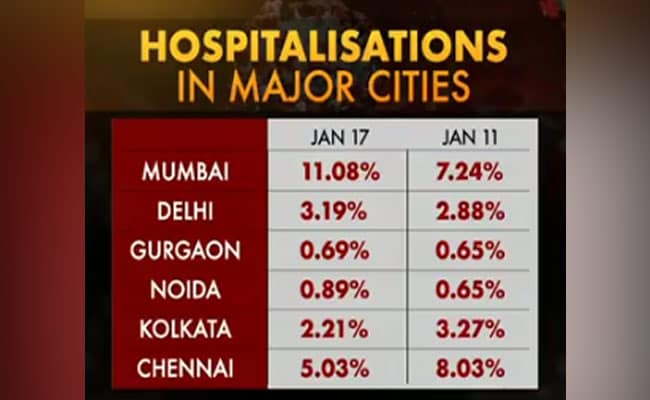 Covid Cases: A look at the hospitalisation rate in major cities.

In Uttar Pradesh’s Noida, the hospitalisation rate on January 11 was .65 per cent while on Monday, it had shot up to .89 per cent. Uttar Pradesh will vote in the February-March elections.

In Haryana’s Gurgaon, it was a difference of .04 per cent – from .65 per cent to .69 per cent. But the weekly positivity rate in the city has been an alarming 37 per cent – indicating that one in three people is testing positive.

Speaking to NDTV, Dr Muffazal Lakdawala, Advisor to Mumbai’s civic body on Covid, said, “On one hand there is hospitalization for asymptomatic cases for isolation, for instance, slum-dwellers who can’t isolate themselves. The next lot of people are those above 60 with comorbidities, they are taking care.”

Is Mumbai is past the peak of the third wave? Replying to the question, he added, “I think we are seeing a downward trend… which is very very encouraging. But I would not say that we are past the peak. If we continue to see this trend over the next week, then we can say that.

In Kolkata, while the hospitalisation rate dropped from 3.27 per cent to 2.21 per cent between January 11 and January 17, the weekly positivity rate has been 54 per cent – suggesting that one in two people is testing positive.

The weekly positivity rate of 11 states has been higher than the national average of 15.2 per cent. Goa (36.1 per cent) tops the list followed by West Bengal (31.5 per cent).

However, a mere drop in cases is not an absolute indicator if the spread of the virus is slowing down or is no longer worrying, the hospitalisation rate and the positivity rate seem to indicate. Low testing may be one of the factors contributing to the dip in daily cases.