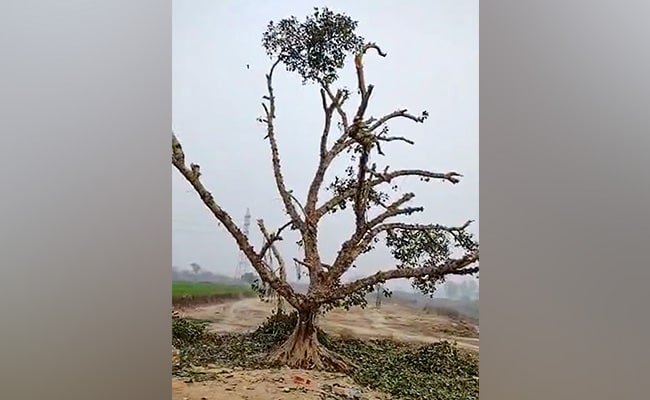 A 120-year-old banyan tree which was allegedly trimmed by local land mafia.

Residents of Khampur village in Delhi’s Alipur are keeping a strict vigil on a 120-year-old ‘sacred’ banyan tree in the area after it was trimmed by unidentified people while they were asleep.

Locals of the village said they have an emotional attachment with the tree and worship it during festivals while some of them blamed the local land mafia for the incident.

The villagers approached the police after the issue came to light on Friday.

Ajay Kumar, a resident of the area, said, “My father had passed away and we were busy with the rituals. After we were done, we got to know that the tree had been trimmed. Nearly five to six branches of the tree which were around six inches wide were trimmed.” Kumar said Khampur is his ancestral village and many generations of his family have lived there.

His nephew, Mukesh, said their family has lived in the area for nearly 200 years.

“My grandmother, who was 90, and died a few years back, used to tell us that when she came to this village after her marriage, the tree was there. You can imagine how old the tree must have been,” he said.

“We have aged with the tree. Seeing it in a state like this is painful,” an elderly person from the village said.

Ajay Kumar claimed that it was the work of the land mafia.

A residential colony is being built on the piece of land where the tree stands. We had told them to leave some space for the tree and not cut it. It seems the people who are involved in construction are behind this, he alleged.

His nephew, however, said that the employers of the people who own the land, denied any involvement in the act.

Ajay Kumar said the villagers have been guarding the tree ever since the incident came to light. He said police have asked them not to take the law in their hands and if any activity around the tree is observed, they should be immediately informed.

The villagers are planning to approach the district magistrate and concerned civic body.

Meanwhile, a forest department official said they are not aware about the issue.

“The issue has not been brought to our notice. No permission has been granted to anyone to cut any tree in the area. If we receive a complaint, we will look into it,” a forest official said. PTI SLB GVS RHL