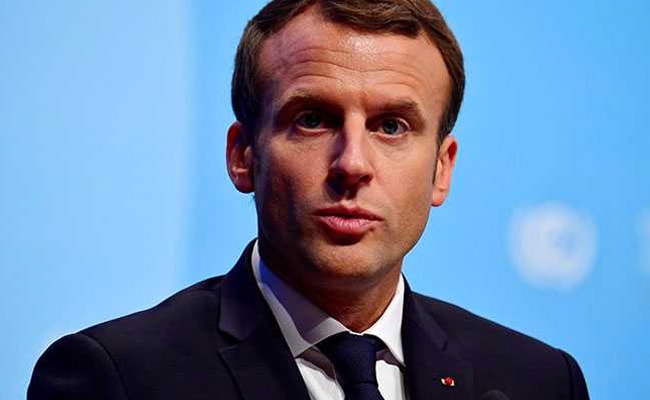 “There is no false suspense. I want to,” said France’s Emmanuel Macron regarding re-election. (File)

French President Emmanuel Macron wants to stand for a second term in April presidential elections but will only declare his intentions once he is sure, he said in an interview with the Le Parisien newspaper published Tuesday.

“There is no false suspense. I want to,” Macron, the last of the major hopefuls in the election yet to declare their candidacy, told the paper when asked if he planned to stand.

“Once the health situation allows it and I have made everything clear — inside myself and with respect to the political equation — I will say what it (the decision) is.”

He added: “This decision is solidifying deep inside me. I need to be sure that I am able to go as far as I want.”

The comments to Le Parisien represented by far Macron’s clearest indication yet he plans to stand — while not ending the suspense over his intentions.

Macron, who swept to power in 2017 on a pledge to reform France and restore its status as a global power, is the overwhelming favourite to win the election but analysts caution his victory is far from certain.

He faces a challenge from his old far-right rival Marine Le Pen — who he trounced in the 2017 run-off vote — but also from the far-right pundit Eric Zemmour who enjoyed a major surge in early support.

Most analysts however think the most credible challenge will be from the candidate of the right-wing Republicans’ Valerie Pecresse, should she manage to make the run-off vote.

The left has so far failed to unite behind a single candidate.

It would be a sensation if Macron were to decide not to stand, but he seems intent on keeping the suspense going for the next weeks, insisting his duty is as head of state and not a candidate.

The latest opinion poll published on Tuesday by the Cluster17 institute for the Marianne weekly again showed Macron well ahead in a first round but the other candidates clustering behind him.

Political tensions have surged over the New Year as campaigning gets underway, with rows between Macron’s allies and Pecresse’s faction erupting over a decision to fly the European flag from the Arc de Triomphe, as well as the holding up of Covid-19 legislation in parliament.