Here Are The Highlights Of The Parade On January 26 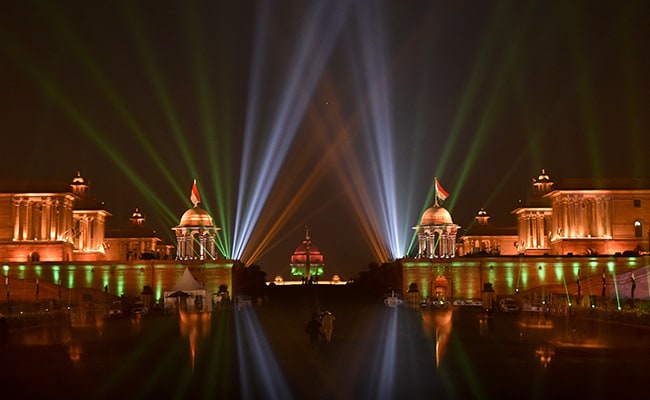 On the eve of Republic Day, a rehearsal of the laser light show for Beating The Retreat

President Ram Nath Kovind will lead the nation in celebrating the 73rd Republic Day on January 26. This year’s celebrations are more significant because it is the 75th anniversary of India’s Independence, and it is being commemorated as ‘Azadi ka Amrit Mahotsav’ across the country. For the main parade on Rajpath on January 26 and the ‘Beating the Retreat’ celebration at Vijay Chowk on January 29, the Ministry of Defence has planned a few new events.

Now onwards, every year the Republic Day celebrations will last for a week. The festivities will begin on January 23, the birth anniversary of Netaji Subhas Chandra Bose, and conclude on Martyrs’ Day — January 30.

The parade at Rajpath will begin at 10.30 am, instead of the earlier timing of 10 am to ensure better visibility.

Among the new events planned for the main parade are the launch of the National Cadet Corps’ ‘Shaheedon Ko Shat Shat Naman’ programme, a grand flypast by 75 Indian Air Force aircraft and helicopters, cultural performances by 480 dancers selected through a nationwide Vande Bharatam dance competition, a display of 10 scrolls each measuring 75 metres prepared during the ‘Kala Kumbh’ event, and installation of 10 large LED screens. For the Beating the Retreat ceremony, a drone show with 1,000 indigenously manufactured drones has been planned.

Arrangements and safeguards in times of COVID-19

People have been asked to register on the MyGov portal to watch the live event online. They will also be able to vote for the best marching contingent and tableau in the popular choice category.

For entry at the parade on Rajpath, only double vaccinated adults, and single-dose vaccinated children of 15 years and above will be allowed. Those under the age of 15 will not be allowed. All social distancing norms will be followed, and masks are mandatory. Due to the pandemic, there will be no foreign contingent this year.

Arrangements have been made to allow people from those segments of society who usually don’t get the opportunity to watch the parade. Auto-rickshaw drivers, construction workers, safai karamcharis and front-line health workers will be invited to see the parade and the Beating the Retreat ceremony.

The parade ceremony will commence with Prime Minister Narendra Modi paying a visit to the National War Memorial. By placing a wreath, he will lead the nation in paying tributes to the fallen heroes. The Prime Minister and other dignitaries will then proceed to Rajpath’s saluting dais.

The National Flag will be unfurled, followed by the National Anthem and a 21-gun salute. The parade will begin with a salute from President Ram Nath Kovind. The winners of the highest gallantry awards will also take part in the parade. They include the winners of Param Vir Chakra and Ashok Chakra.

Aside from that, the parade will feature numerous contingents from the Indian Army. The marching contingents’ theme will be a representation of the Indian Army’s dress and personnel weapon progression over the last 75 years.

A total of 96 young sailors and four officers will make up the Naval contingent. It will be followed by the Naval Tableau, which will highlight the Indian Navy’s multi-dimensional capabilities.

There will be 96 airmen and four officers in the Air Force contingent. ‘Indian Air Force, Transforming for the Future’ is the theme of the tableau.

Two tableaux, representing the country’s defence technical accomplishments, will be displayed by the Defence Research and Development Organisation (DRDO).

Tableaux of 12 states and Union Territories — Arunachal Pradesh, Haryana, Chhattisgarh, Goa, Gujarat, Jammu and Kashmir, Karnataka, Maharashtra, Meghalaya, Punjab, Uttar Pradesh, and Uttarakhand — will then be showcased. There will also be tableaux of nine ministries and departments.

This will be followed by cultural performances by the 480 dancers and a motorcycle display.

The grand finale and the most keenly awaited segment of the parade, the flypast, will, for the first time, witness 75 aircraft and helicopters of the Indian Air Force displaying a number of formations. For the first time, IAF has coordinated with Doordarshan to show cockpit videos during the flypast.

The ceremony will culminate with the National Anthem and the release of tricolour balloons.