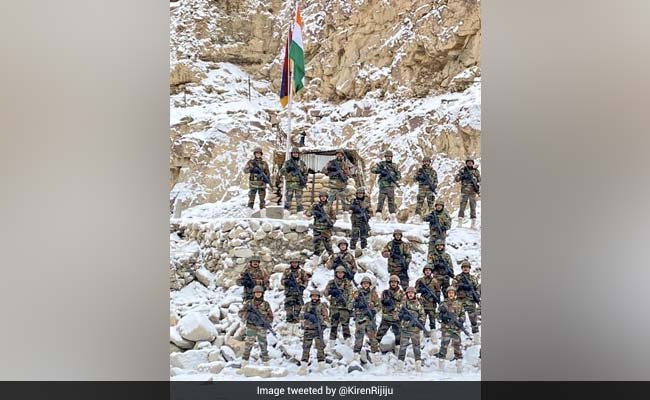 Indian Army troops with the national flag at Galwan Valley

The Indian Army hoisted the national flag in eastern Ladakh’s Galwan valley during the New Year, Union Minister Kiren Rijiju tweeted. The tweet comes a day after Chinese troops in a state media tweet showed them with their flag at Galwan valley.

Brave Indian Army soldiers in Galwan Valley on the occasion of #NewYear2022pic.twitter.com/5IyQaC9bfz

Army sources have told NDTV that the video from the official Chinese media Twitter handle does not violate the demilitarised zone between the two countries in the area.

After the violent faceoff in Galwan valley in June 2020, several rounds of military and diplomatic talks have been held but largely they have ended in a stalemate.

Disengagement at some border points did take place but by and large, there is an impasse on complete disengagement. Disengagement at Depsang and Hot Springs remains a key sticky point. There is still a huge build-up of forces on each side of eastern Ladakh even during the harsh winter.

Satellite images from July last year confirmed the disengagement of Indian and Chinese soldiers from the Galwan clash site by 2 km on either side. This took place after special representative-level talks between National Security Adviser Ajit Doval and China’s Foreign Minister Wang Yi.

The new video tweeted by the Chinese media Twitter handle, sources have told NDTV, is not within the area where this disengagement took place.

India and China have also not been on the best of terms over Arunachal Pradesh. India last week said it has seen reports of China attempting to rename some places in Arunachal Pradesh “in its own language”. India said the state has been and will always be an integral part of India and “assigning invented names does not alter this fact”.