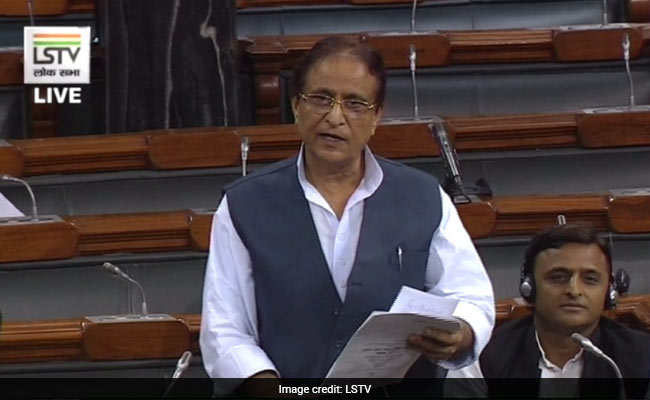 Jailed Samajwadi Party MP Azam Khan will contest the upcoming assembly election in Uttar Pradesh from his home turf Rampur, the Samajwadi Party announced today. Mr Khan is the current Lok Sabha MP from Rampur and has been in jail since February 2020 in various cases filed against him in the tenure of Yogi Adityanath’s BJP government.

The Samajwadi Party has also announced Abdullah Azam, Azam Khan’s son who was also in jail for two years and recently got bail, as the party’s candidate for the neighboring Suar constituency.

Abdullah Azam contested the 2017 Assembly election from Suar as a Samajwadi Party candidate and won. In December 2019, the Allahabad High Court cancelled his victory saying he was below the age of 25 when he filed his nomination.

Since Feb 2020, Abdullah Azam has been in jail on multiple charges including cheating.

There was intense speculation about whether Azam Khan and his son will be given Samajwadi Party tickets for this election.

In the recent years, the Uttar Pradesh police filed multiple cases against Mr. Khan and his family, most of which are related to cheating and forgery.

Earlier this month, Chief Minister Yogi Adityanath launched a blistering attack on the Samajwadi Party in Rampur, saying earlier, the famous ‘Rampuri’ knives were used only for grabbing the land of the poor and now, the current state government is promoting it under the ODOP scheme to enrich people.

In 2020, after Azam Khan and his family surrendered before a court in Rampur in a case involving fake birth certificates, the Chief Minister his government was “cleaning up dirt”.

Speaking in the state assembly, the Chief Minister said, “Virus grows in dirt. There is a campaign to clean this kind of dirt”, in an apparent reference to the arrest.

The BJP has already announced its candidate from Rampur — Akash Saxena, a businessman and local BJP leader responsible for many of the cases against Azam Khan and his family.

The BJP’s ally Apna Dal(S) has fielded a Muslim candidate — the first by the NDA in UP since 2014 against Abdullah Azam in Suar.

Haider Ali Khan, a member of the erstwhile royals of Rampur, will take on Azam Khan’s son from the seat. His grandfather Zulfiqar Ali Khan was a five-term Congress MP from Rampur. His father, Nawab Kazim Ali Khan, is a four-term MLA who as of now is the Congress candidate from Rampur — a seat next door to Suar.

A few days ago, Azam Khan had approached the Supreme Court seeking interim bail to campaign in the upcoming Uttar Pradesh assembly elections.

In his plea, Azam Khan said that the state has “adopted all means available” to delay the proceedings on his three remaining bail applications to ensure that he remains in jail  during the assembly elections that begin on February 10.