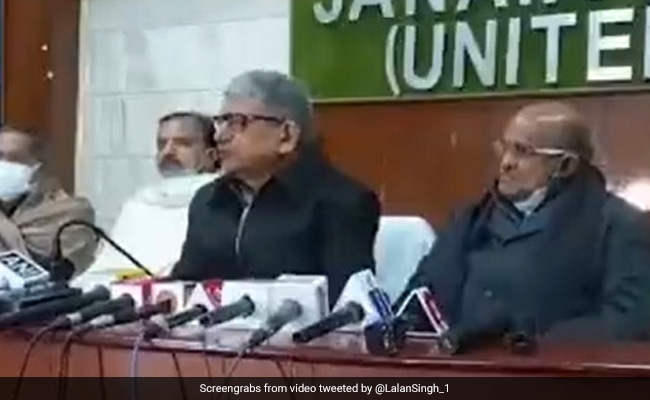 The JDU president said that even after a long wait, there was no positive response from the BJP

Speaking on the occasion, Rajiv Ranjan Singh said, “RCP Singh, a Minister in the Union Cabinet from our party, had informed us earlier that a discussion regarding the Uttar Pradesh polls was held with BJP leaders Amit Shah, JP Nadda and Dharmendra Pradhan. He had told that BJP is ready for an alliance. That is why we kept waiting.”

The JDU president said that even after a long wait, there was no positive response from the BJP and JP Nadda himself stated gave a statement that BJP’s allies in Uttar Pradesh are Apna Dal and Nishad Party.

Referring to RCP Singh, Rajiv Ranjan Singh said that only the former was having talks with the BJP leadership on behalf of JDU.

“Apart from him, no one from our party was talking to the BJP leadership. So, he knew everything about this subject. Now, only he knows how truthfully and honestly he was telling us everything. Had we known in advance that the alliance was not happening, we would have contested more seats with better preparation,” emphasised the JDU president.

He said that every party has the right to expand and JDU had contested elections in many states including Arunachal Pradesh, Nagaland, Delhi and Uttar Pradesh before.

He also did not give any answer to the question of whether JDU will field a candidate against Uttar Pradesh Chief Minister Yogi Adityanath from Gorakhpur Sadar or not.

Elections to the 403 Assembly constituencies in Uttar Pradesh will be held in seven phases starting February 10.