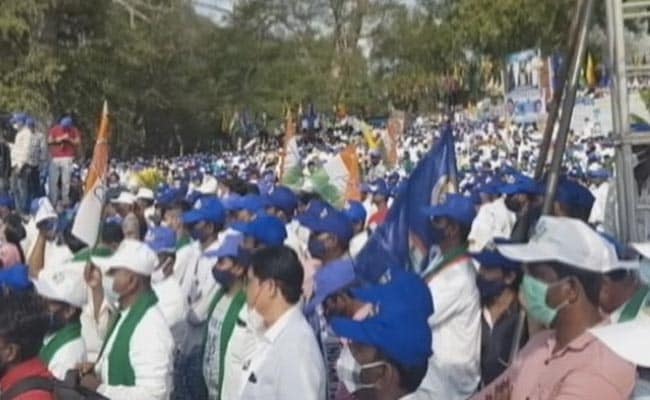 A day after Karnataka reported 8,906 Covid cases – the most in a day since mid-June – the Congress launched a 10-day protest march – over a drinking water project – that drew a crowd of thousands in defiance of pandemic protocols, including the use of face masks and maintain social distance.

The march – titled ‘namma neeru, namma hakku, or ‘our water, our right’ – was led by Leader of the Opposition Siddaramaiah and state Congress chief DK Shivakumar, who told NDTV “there is no corona… no disease (in Ramnagara district, where the padyatra was flagged off)”.

“We are walking for water. The BJP government wants to stop us… but there is no coronavirus, no disease here. They simply imposed Section 144 (to ban large gatherings) and said no one can enter this area,” Mr Shivakumar told NDTV.

The march – which is scheduled to cover 100 km over its 10 days – began today despite the Karnataka government having ordered a weekend curfew that is in effect till 5 am Monday.

As he marched along (wearing black sneakers for comfort) Mr Shivakumar was not wearing a face mask either, despite being surrounded by people. 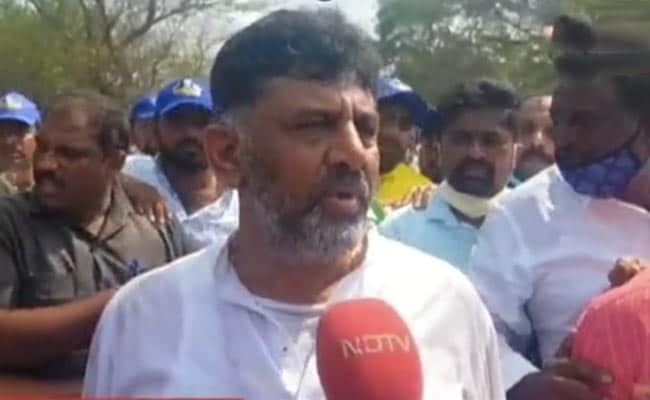 The district administration had earlier served notice to Mr Shivakumar asking him not to violate the curfew, but the Congress leader dismissed the request and vowed to press on with the programme.

Mr Shivakumar declared today that over 100 MLAs and 200 ex-MLAs and ministers, as well as actors and religious leaders, were either participating in the march or had offered their support, and that the ruling BJP was using the threat of COVID-19 to stifle the opposition and people’s concerns.

“It will not happen. They (the BJP government) are only trying to create (fear). There is no spread of any disease here… when the Chief Minister conducted an oath in the banquet hall there were more than 5,000 people. It didn’t spread there… why should it spread here?” he told NDTV.

Chief Minister Basavaraj Bommai has questioned the timing of the Congress’ grand protest and warned of legal action if the rules are violated.

“During the coalition government (when the Congress and JDS were in power), DK Shivakumar was Water Resources Minister… there was no initiation from his side then. There were no discussions brought to the table…” he pointed out.

The 10-day march is scheduled to end in Bengaluru, where the Covid positivity rate is over 10 per cent already; the city reported a worrying 7,113 new cases on Saturday.

The country is scrambling to contain a frightening surge in Covid cases over the past few weeks, fuelled, in part, by the more infectious Omicron strain. Karnataka – which reported India’s first two Omicron Covid cases back in December – has 441 cases, behind only Delhi and Maharashtra.