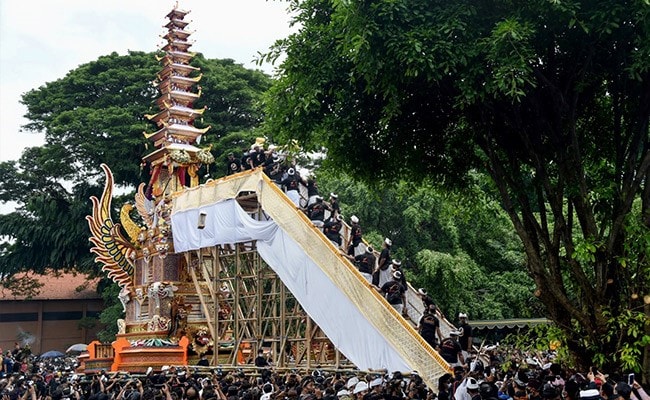 Thousands of Balinese braved pandemic restrictions and flooded the streets of the resort island’s capital on Friday to send off the king in a lavish cremation ceremony.

The extensive ritual for Anak Agung Ngurah Manik Parasara, who died in late December at the age of 76, started on January 2 and continued until the main event on Friday.

Enthusiastic locals and tourists crowded the ceremony in Denpasar on the Hindu-majority island for the traditional royal cremation ceremony — or “pelebon” — held to release the soul of the departed.

Once that is complete, it is believed, they will be able to reach the upper realm where the soul awaits rebirth.

Royal family members paraded past shaded by gilded black umbrellas, while dozens of men in traditional Balinese dress carried the king’s body in a colourful 10-metre tall wooden tower, along with a massive Ogoh Ogoh, or demon statue.

The remains of Parasara – who was known as the King of Pemecutan – were cremated and his ashes will be thrown into the sea.

Parasara was known as a spiritual leader and an advocate of religious tolerance.

However, in 2004 he was found guilty of murder after he stabbed his step-brother to death in a family feud.

He was released after serving one year in Bali’s Kerobokan prison.

Bali governor Wayan Koster had ordered all officials involved to take a Covid-19 test before the event.

“Usually the tower is not that high. But, because the passing one was a royal family member, the tower is very high. Photography-wise the view is fantastic!” Gung Ngurah Dika, who came with his friend to take pictures, told AFP.