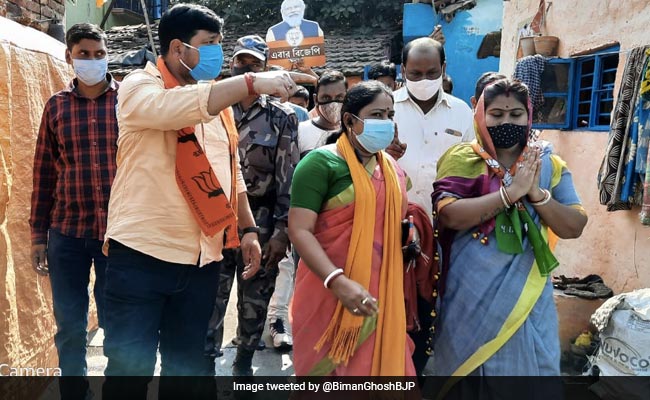 The BJP MLA, however, denied the charges and said no rule was violated.

Elections to municipal corporations of Chandannagar, Bidhannagar, Siliguri and Asansol are slated to be held on January 22.

According to an officer of Chandannagar police commissionerate, Mr Ghosh was leading a rally of 100 people in ward number 26, where Sandhya Das is the BJP candidate, flouting the SEC guidelines, which, in view of the COVID-19 situation, stipulated that not more than five persons can together participate in civic poll campaigns.

An altercation broke out when one of the personnel from the commissionerate told the MLA that he was violating the rules, but the BJP activists refused to terminate the rally, the officer said.

Five BJP members, including Mr Ghosh and Mr Das, were then arrested and taken to a nearby police station, the officer explained.

They were released on bail later in the day, the officer added.

The BJP MLA, however, denied the charges and said no rule was violated.

He maintained that just five members of his party, including him and the candidate, were holding a campaign in the area.

Mr Ghosh said the others who followed them were local residents.

Alleging the police and SEC are acting in a “partisan manner” and turning a blind eye to similar rallies of the ruling TMC, the MLA stated, “The SEC had no problem in going ahead with elections amid the rising COVID-19 cases, but problem arises only when we go out for campaigns. Gangasagar mela, too is being held, notwithstanding the crisis. We are the only ones who are made to suffer.” Hitting out at the saffron camp, TMC MP Kalyan Banerjee said the BJP is an “indisciplined” party.

Meanwhile, Das Chakraborty, the TMC candidate from ward number 37 of Bidhannagar Municipal Corporation, was seen taking off her mask during a door-to-door campaign on Sunday.

Das Chakraborty, when approached by reporters, said she had temporarily removed the mask during interaction with locals as many had apparently claimed that her words were not clearly audible with the mask on.