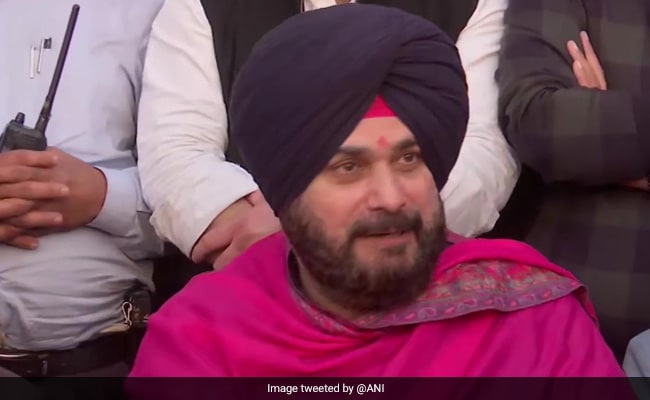 Punjab government has maintained that there was no security lapse during PM’s visit. (File)

Punjab Congress chief Navjot Singh Sidhu hit out at BJP leaders on Friday, alleging that a rant about security lapses during Prime Minister Narendra Modi’s visit to the state is being made to reap political benefits in other poll-bound states and save themselves from humiliation as PM Modi would have had to address a gathering of 500 people when arrangements for 70,000 were made.

Along with Congress leader Alka Lamba, Mr Sidhu launched a scathing attack on the BJP, which has accused the Congress of conspiring to physically harm the prime minister.

The cricketer-turned-politician alleged that by defaming Punjab, the leaders of the saffron party want to reap political benefits in other poll-bound states.

The prime minister’s convoy was stranded on a flyover due to a blockade by protesters in Punjab’s Ferozepur on Wednesday, after which he returned from the poll-bound state without attending any event, including a rally.

The Punjab government has maintained that there was no security lapse, but has ordered a probe into the incident.

“It is an attempt to save themselves from humiliation, because it must never have happened that a prime minister addressed 500 people when 70,000 chairs were arranged (for the BJP’s Ferozepur rally on Wednesday).

“What does this show and that too at a programme of the prime minister? They (BJP leaders) stand exposed. It is very clear that they have no support in the state,” Mr Sidhu said.

He said to thrust the onus of PM Modi’s security entirely on the state police is not right as 10,000 people are involved in the prime minister’s security paraphernalia, including officials of the SPG, RAW, IB and other central agencies, and the state police takes instructions from them.

The Congress leader claimed that the BJP has no base or public support left in Punjab.

“It will get a befitting reply (in the upcoming state Assembly polls) and all those saying president’s rule should be imposed in Punjab are its (BJP’s) parrots,” he said.

Mr Sidhu also hit out at former chief minister Amarinder Singh, who has demanded the imposition of president’s rule in Punjab after the security lapses during PM Modi’s visit.

Mr Sidhu wondered “why attempts are being made to spoil Punjab’s atmosphere when polls are approaching”.

He said the BJP thinks that only those who are with it are patriots, while asserting that Congress workers will fight for the nation “till their last breath”.

Reminding PM Modi that he is the prime minister of the entire country and not only of those associated with the BJP, the state Congress chief said, “Everyone knows how precious your life is. But Punjab and Punjabiyat are being insulted when it is said that the prime minister has said (to thank Chief Minister Charanjit Singh Channi) that his life was saved. This is a big farce and I say this categorically.”

Mr Sidhu said those associated with the BJP and the RSS may not have unfurled as many tricolours as were wrapped around the bodies of Punjabis who laid down their lives for the sake of the country.

Punjab is considered as the country’s “sword arm” and hence, BJP leaders must stop this dirty politics, he added.

Replying to a question, the Congress leader said there was no plan initially that PM Modi will travel from Bathinda to Ferozepur by road and the decision was taken at the last minute (in view of inclement weather).

Pointing out that thousands of farmers were protesting at Delhi’s borders for almost a year, he asked, “Did the prime minister meet them even once?” The protesting farmers were dubbed as terrorists and Khalistanis, Mr Sidhu said.

“In Punjab, the majority of farmers can stand against the prime minister, but I do not believe that even one of them will indulge in violence, posing danger to his life. We are bound by Punjabiyat and our love for the country. Therefore, to say that the prime minister’s life was in danger is insulting Punjabis and the BJP will not succeed in this,” he added.

On Thursday, Mr Sidhu had said PM Modi was “troubled” as he had to wait for only 15 minutes, whereas farmers staged a protest against three contentious agriculture laws of the Centre for a year.

He also hit out at Amarinder Singh, whose party Punjab Lok Congress has stitched up an electoral alliance with the BJP, alleging that the former chief minister is parroting what is being told to him by the saffron party.

Ms Lamba, the media in-charge of the Congress for the Punjab polls, wondered that if the prime minister himself feels insecure, how would a country of over 130 crore people feel safe under him.

She also sought to know from BJP leaders why did they not make an issue “when there was a security breach during the prime minister’s visit to Noida earlier”.

“But in Punjab, the prime minister tells officials in Bathinda that they must thank the chief minister that he came out alive of that situation,” Ms Lamba said.

“A political drama is being played out and attempts are being made to divert attention from real issues,” she added.

Ms Lamba said there was nothing to suggest that any of the protesters went too close to PM Modi’s convoy, “even though some BJP supporters carrying their party flags reached quite close to where his convoy was”.