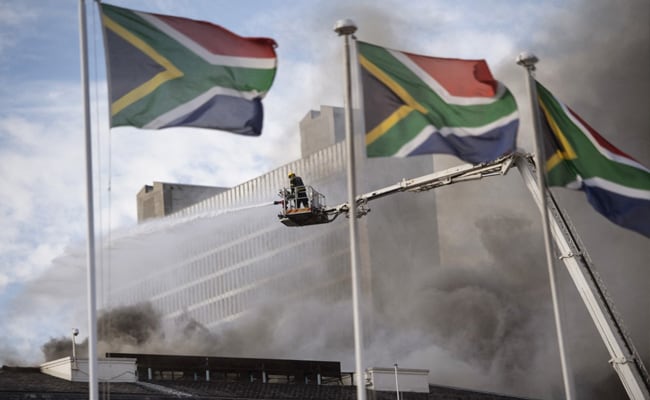 No casualties were reported in the fire, but the extensive damage has shaken the country. (File)

City Hall, which will host the annual event bringing together the executive, the legislature and the judiciary on February 10, was where Nelson Mandela addressed crowds following his 1990 release from prison.

The flagship political gathering is traditionally held in the National Assembly chamber, but a fire that broke out in the Cape Town-based complex on Sunday badly damaged the building, making it unusable.

“The extensive damage has necessitated the institution to find an alternative venue off-site to host this important event in the parliamentary calendar and the country,” parliament said in a statement.

It said the Cape Town City Hall offered the infrastructure and capacity to host the flagship event.

“It is also a befitting place considering its historical significance which is embedded in the minds and hearts of South Africans,” it said.

When Mandela, South Africa’s first black president, spoke to the nation and euphoric crowds following more than 27 years in prison, Ramaphosa stood by his side, holding the microphone.

President Ramaphosa, who was 37 years old when Mandela was released, “will address the nation from the City Hall, 32 years since that historic occasion in 1990,” parliament said in the statement

It took more than 70 hours to extinguish the blaze which tore through the wood-panelled assembly chamber where parliamentary debates are held.

No casualties were reported in the fire, but the extensive damage has shaken the country.

A 49-year-old man, Zandile Christmas Mafe, appeared briefly in court Tuesday on charges of breaking into parliament, arson and intention to steal property, including laptops and documents. He is due back in court next week.

No Data Leaked From Co-WIN Portal, It Is Safe And Secure: Centre

No Data Leaked From Co-WIN Portal, It Is Safe And Secure: Centre