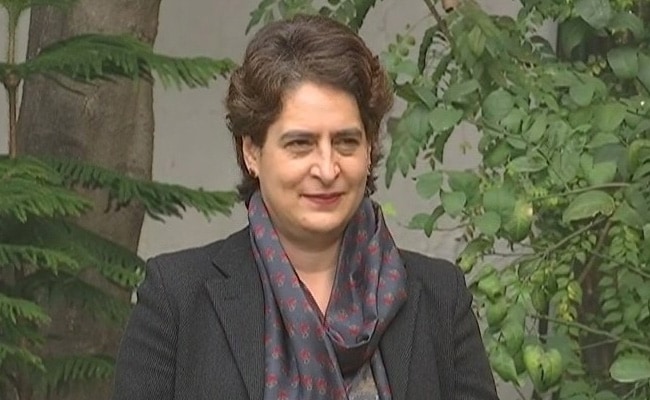 Priyanka Gandhi is leading the Congress’ campaign in Uttar Pradesh

Alleging that polarisation suits both the BJP and the SP to consolidate their vote bases in Uttar Pradesh, Congress leader Priyanka Gandhi Vadra on Tuesday said the ruling party may end up being the largest beneficiary of this divisive rhetoric and therefore people need to be given a choice of another kind of politics that doesn’t divide society on religious or caste lines.

Citing that farm laws and the Lakhimpur Kheri incident caused “immense pain” to farmers, she also said the government’s “indifference” and “hostile” approach towards the farmers will play an important part in determining the outcome of the assembly polls in Uttar Pradesh’s western belt.

In an exclusive interview to PTI, Priyanka Gandhi said her party will take a call on whether to forge a post-poll alliance once the election results are out and if and when such a situation should arise.

With her party going to the polls with a focus on women and announcing that it will give 40 per cent of tickets to them, she said women are 50 per cent of the population and if they consolidate into a political and electoral force by recognising their own value and strength in political terms, they can change the politics of our nation.

Asked about the key issues in Uttar Pradesh polls and whether the farm bills and the Lakhimpur Kheri incident will have an impact, she said different political parties are highlighting different issues, some of these are divisive and intended to polarise the debate along religious or caste lines.

“It is a reality of politics in UP that elections are fought and often won in this manner but I firmly believe that this has to change. Elections must be fought on issues of development — employment, job creation, health services, education — these should be central to our discussion and debate,” she asserted.

The Congress in Uttar Pradesh is working on a positive and progressive agenda, Priyanka Gandhi said, adding that “we have refused to engage in a negative discourse”.

As far as the farm bills and the Lakhimpur Kheri incident are concerned, they have been a source of “immense pain” to farmers across the state but especially in western Uttar Pradesh, she said.

“I do believe that the government’s indifference, its hostile and autocratic approach towards the farmers who were protesting and those who lost their lives, will play an important part in determining the outcome of the elections in the western belt,” Priyanka Gandhi said.

The Centre repealed the three farm laws last year after a nearly year-long protest by farmers, including from western UP, who had camped at the borders of Delhi, demanding their repeal. Also, eight persons, including four farmers, were killed during a farmers’ protest on October 3 in Lakhimpur Kheri.

On divisive rhetoric and how her party plans to counter polarisation, Priyanka Gandhi said she feels that at some level, whether it is the “polarising force” of the Bharatiya Janata Party (BJP) or the Samajwadi Party (SP), it serves the same purpose — it suits both these parties as it consolidates their vote bases.

“Ultimately, I feel the largest beneficiary of this polarisation may end up being the BJP. In order to stop the BJP actually, you need a party that changes the discourse rather than positing another pole for polarising it further,” she said, in an apparent swipe at the SP.

The answer to this kind of politics lies in refocusing the agenda on development, she added.

Her remarks come days after Uttar Pradesh Chief Minister Yogi Adityanath stated that the assembly polls in the state will be about ’80 per cent vs 20 per cent’, evoking a sharp response from the Opposition that accused him of attempting to polarise the electorate. Muslims constitute around 20 per cent of the state’s population.

BJP leaders have been accused of raising issues such as the Ram Temple and Kashi Vishwanath temple to polarise voters. The saffron party, in turn, has hit out at the Akhilesh Yadav-led party SP of invoking Mohammad Ali Jinnah and Pakistan to vitiate the discourse.

Priyanka Gandhi said people are suffering and they have to be made to connect this suffering to the lack of governance.

“Event management is not the same as effective governance. People have to be made to understand that, and demand good governance. Despite the crores it spends on advertising itself as one of the leading state governments in India, the truth is that the BJP government in UP does not know how to govern,” she alleged.

“Fundamentally, it has allowed the structures that sustain governance and development to be taken over by mafias and destroyed. It has done virtually nothing to build infrastructure, to improve education and healthcare, to provide jobs and reduce the massive hit that small industries and businesses have taken post-Corona,” Priyanka Gandhi said.

Stressing that people have to be shown that there is a choice, Priyanka Gandhi said another kind of politics is possible, and it is more beneficial to them than the politics of division which only benefits certain political parties.

On her party making a strong pitch for women in the polls and basing the campaign on it, the Congress general secretary said she believes that women should vote as a separate political entity and this is a beginning in that direction.

“They are 50 per cent of the population, yet they are hugely under-represented in the political space. If they consolidate into a political and electoral force by recognising their own value and strength in political terms — they can change the politics of our nation,” she said.

Polling for the 403-member Uttar Pradesh Assembly is scheduled to be held in seven phases from February 10 to March 7 and the counting of votes will be taken up on March 10.