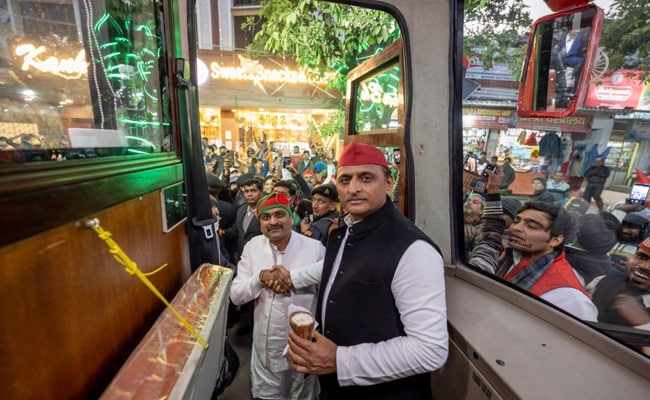 Samajwadi Party chief Akhilesh Yadav today took a fresh swipe at the BJP, suggesting the party hold a ‘jan maafi (apology)’ yatra across poll-bound Uttar Pradesh instead of the ongoing ‘jan vishwaas (trust)’ yatra. “The people will not forgive them,” he said at a press conference in eastern UP’s Gonda.

The ruling BJP has been holding six different yatras across the state that started in the last week of December. Mr Yadav, a former UP Chief Minister, has already finished 11 rounds of his ‘Samajwadi vijay (victory)’ yatra, which are larger in scale and have attracted thousands of people.

He also took a swipe at Chief Minister Yogi Adityanath over his statement that he is ready to contest next month’s Assembly election from any seat his party decides; this follows speculation Adityanath could contest from either Ayodhya or Mathura, both of which are temple towns.

Mr Yadav also replied with a question of his own when a journalist asked him to comment on Adityanath’s seat plans.

“You should not ask me about where the Chief Minister will contest from. You should ask this – he is asking for a ticket ‘kabhi is Vidhan Sabha se… kabhi us Vidhan Sabha se‘, but his party workers are angry because he is not even a party member,” he said.

“He just came from nowhere and became Chief Minister. Many feel betrayed that their years of sweat for the party came to nothing,” Mr Yadav said.

When asked if he would contest the election, Mr Yadav only repeated the statement – his party would decide. “Whether I contest or whether I make other people contest, the party that will decide,” he said.

Meanwhile, three days ago, Lord Krishna became a recurring theme in the high-profile face-off between Adityanath and Mr Yadav, who is perhaps the most serious rival to the BJP’s re-election bid.

Lord Krishna “must be cursing” those who were in power and did nothing for Mathura and Vrindavan, Adityanath declared at a government event in Aligarh on Tuesday.

“Some people (a snide reference to Mr Yadav) must be seeing Lord Krishna in their dreams, and he must be telling them ‘cry now on your failures. What you could not do, the BJP government has done’. Lord Krishna must be cursing them… telling them, ‘when you were in power you did nothing for places like Mathura and Vrindavan’,” he said, referring to two holy cities linked to Lord Krishna.

The “curse” swipe was a response to Mr Yadav commenting, the evening before, that Lord Krishna had told him, in his dreams, that he would come to power in Uttar Pradesh.

“Last night, Lord Krishna came in my dreams and said you are going to form the government. He did not come once but comes each day,” he said on Monday.

All of this started after a BJP leader invoked Lord Krishna in the context of speculation over Adityanath contesting the election.

“Last night twice I had dreams Yogi Adityanathji should fight from Mathura. I felt Lord Krishna was directing me to act as a mediator,” Harnath Singh Yadav, a BJP Rajya Sabha MP said, implying that the Chief Minister would contest from a constituency different from his hometown Gorakhpur.

Adityanath, a former MP from Gorakhpur – where he is also Head Priest at the famous Gorakhnath temple – did not contest the 2017 election and is a member of UP’s legislative council.

However, ahead of the 2022 election, sources say there is pressure on him to contest – from either Ayodhya or Mathura – as that would appeal to the party’s core Hindutva vote-base.

Akhilesh Yadav is an MP from east Uttar Pradesh but has never contested a state election.

In the last few months, he has flip-flopped over whether he will debut in the approaching polls. He first told a news agency he would not contest. Later, he said he may contest.