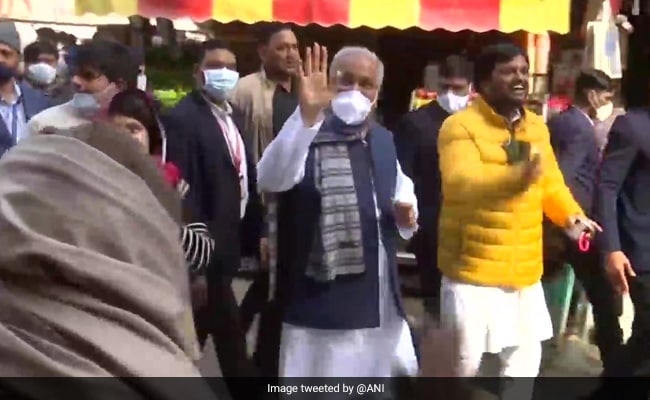 Bhupesh Baghel is the Chief Minister of Congress-ruled Chhattisgarh

A police case was filed against Chhattisgarh Chief Minister Bhupesh Baghel and several others on Sunday for violating Covid safety protocols while campaigning for the Congress in Noida ahead of next month’s Uttar Pradesh Assembly election.

The case was filed after a complaint from the District Election Officer, who wrote to the Assistant DCP (Noida Police) to flag violation of orders banning the gathering of five or more people in order to minimise the spread of the coronavirus.

Also, as per rules announced by the Election Commission last week – ahead of polls in five states next month – parties going door-to-door must have only five members per campaigning team.

A FIR, or first information report, has been registered at the police station in Noida’s Sector 113, with charges relating to violation of Section 144 and under sections of the Epidemic Act.

Visuals of Mr Baghel’s campaign were shared by news agency ANI and showed the Chief Minister wearing a white face mask as he strides along Noida’s streets, surrounded by over a dozen people.

It is unclear how many of those around him were part of the Congress’ door-to-door team, and how many were bystanders, or local residents, walking with him or observing his campaign.

Congress leader & Chhattisgarh CM Bhupesh Bagehl participated in a door-to-door campaign in Noida, ahead of UP Assembly elections. pic.twitter.com/OsjWcJidBm

Elections in UP and four other states – Manipur, Goa, Uttarakhand, and Punjab – will be held amid a frightening surge in COVID-19 cases across the country.

There were calls for the Election Commission, including one from the Allahabad High Court, to defer polls, but the commission cited constitutional obligations to turn down those requests.

Covid-safety rules have been announced, including a ban on public events and physical rallies till January 22 and extension of voting hours, but questions have been raised over their efficacy.

The measures include ensuring all polling staff (and as many voters as possible) are double vaccinated, but slow vaccination rates in some polling states present a problem,

The Congress has fielded Pankhuri Pathak from Noida. The seat is held by the BJP’s Pankaj Singh, who beat the Samajwadi Party’s Sunil Choudhary by over 100,000 votes in 2017.

UP will vote for a new government in seven-phase polls that will begin February 10, with results due a month later – on March 10. The BJP is looking to retain power and a win will be seen as strong statement ahead of the 2024 general election.

With input from ANI