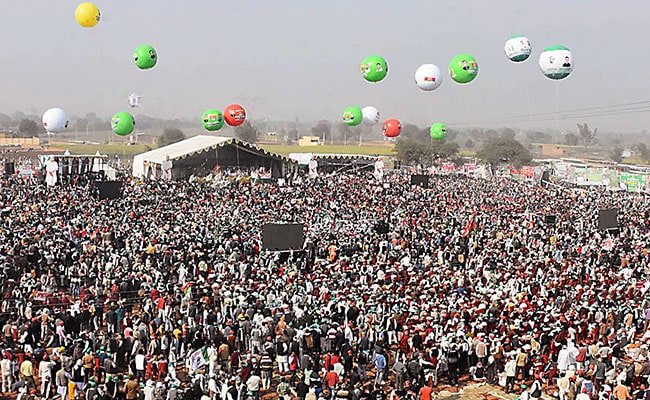 A decision on whether political parties will be allowed to hold physical rallies in states going to polls starting next month will be taken tomorrow at a review meeting of the Election Commission. Physical campaigning was banned by the Commission – until January 15 first and later extended till January 22 – amid an unprecedented surge in cases of coronavirus in the country believed to be driven by the highly transmissible Omicron variant.

The five states – Uttar Pradesh, Uttarakhand, Punjab, Manipur, and Goa – will submit the current status of vaccination and caseload in the virtual meeting.

On January 8, the top poll body had said rallies, roadshows, and other kinds of political events, indoors and outdoors, would be banned till January 15, and that the order would then be reviewed.

The order banning rallies and roadshows was passed as part of a 16-point list aimed at holding polls in Uttar Pradesh, Punjab, Goa, Uttarakhand, and Manipur as safely as possible.

Included in that list of ‘no-no’ activities were the holding of nukkad sabhas (street meetings), or roadside meets, and limiting the number of people for door-to-door campaigning.

Before the ban, the Samajwadi Party came under the poll body’s scanner after massive crowds gathered for the induction of two ex-BJP ministers – Swami Prasad Maurya and Dharam Singh Saini, as well as six other MLAs. Videos showed hundreds gathered – a majority wore no masks and did not maintain social distancing.

India added nearly 3.50 lakh new Covid cases today, a nine per cent jump from yesterday’s 3.17 lakh cases which was also the highest in eight months. With a tally of 3.85 crore cases, India is the second worst-hit country after the US.