Yogi Adityanath Flags Off BJP’s Campaign Vans For UP Election 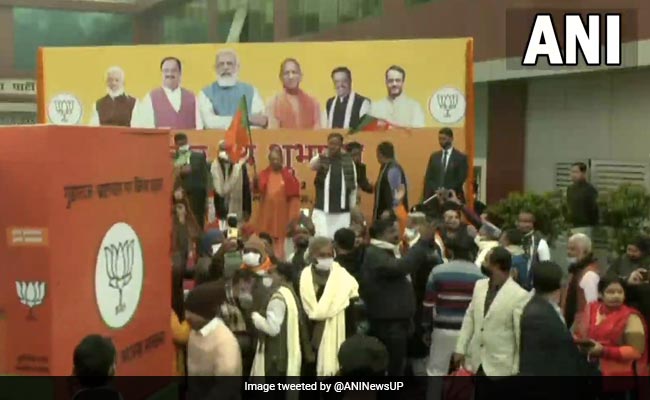 Uttar Pradesh Chief Minister Yogi Adityanath on Saturday flagged off BJP’s ‘campaign vans’ for next month’s assembly polls and said the “double engine” government of the party has fulfilled all its promises.

The BJP government has ensured development of the people while following the mantra of ‘Sabka Saath, Sabka Vikas, Sabka Vishwas’, he said during the programme at the party’s headquarters in Lucknow.

“The 25-crore people of the state have seen that before 2017, businessmen and citizens had to migrate, due to which the progress of the state was blocked. Now, the trend has reversed and criminals are migrating after 2017,” Adityanath said.

“Today, the state is moving towards becoming the leading economy of the country by setting a new paradigm of progress,” he said.

On the purpose of the vans, which are equipped with LED monitors, the Chief Minister said the BJP has launched these to take forward its election campaign in all 403 constituencies of the state.

The benefits of a “double engine” government – BJP at the Centre and the state — are visible to all, he said. “We are working with the commitment towards development of villages, upliftment of poor, prosperity of farmers, employment of youth and protection of mothers and daughters while adopting Prime Minister Narendra Modi’s motto of ‘Sabka Saath, Sabka Vikas, Sabka Vishwas and Sabka Prayas’,” Yogi Adityanath said.

Making clear that there was no place for appeasement of anyone, he said the BJP’s “double engine” government had brought about development for all without any discrimination.